Sikar is the biggest thikana which was ruled by Shekhawat Rajputs who were in Shekhawati. The last titular king was Rao Raja Kalyan Singh during the period of 1922-67. Sikar was the prime center of culture, art and wealth once, and this is evident from historical records. After Independence from the British, the wealth increased tremendously. Sikar contains many spots of tourist significance and till today, Sikar carries the prosperous legacy, culture and heritage, and also modern educational organizations plus good infrastructural facilities. The royal family of Sikar played an important role during the 18th and 19th century and balanced their powers with Britishers and Jaipur State rulers.

The Khatushyamji temple in Sikar is a popular shrine flocked by huge crowds of visitors throughout the year. This temple gained fame for its famous Khatushyamji Fair, held in the months of February and March. This popular fair is significant for depicting the various art forms along with the sparkling folk culture of the area. If you are left with a good amount of time, you can visit Harshnath, Madho Niwas Kothi, Ramgarh, Ganeshwar, and Jeenmata while on the route to Sikar. This historical place Sikar contains ancient havelis attracting a large number of tourists. Apart from the havelis and the Laxmangarh Fort, Sikar has many famous temples, such as the Harshnath temple, Khatu Shyamji temple, etc.


Tourist Places to Visit in Sikar

This historical city of Sikar is a lovely place with many popular tourist spots. Some of the finest examples of magnificent ancient architecture are found here. The following are some of the popular tourist places in the city:

Laxmangarh Fort is an old fort in ruins, located on top of a hill in Laxmangarh town in Sikar. Located 30 kilometers away from Sikar, this fort was constructed by Laxman Singh, Rao Raja of Sikar, in 1862, and he also built a village in 1864 after his own name, as Laxmangarh. The most attractive building in the town of Laxmangarh is a small fortress which is the property of the Jhunjhunwala Family.

This fortress is built with marvelous architecture and emerges above the well established township on its west side. The King of Sikar, Laxman Singh, erected the fort during the 19th century after Kan Singh Saledhi captured the wealthy town. The Laxmangarh fort is a unique type of fort architecture when compared to other forts in the whole world, as the fort structure is constructed upon scattered parts of enormous rocks. History says that the building of this town was following the renowned Jaipur Town planning system. Laxmangarh has in it a vast treasure of colorful paintings of the shekhawati style in the temples, Havelis, and other ancient buildings such as:

Khatushyamji temple is constructed using the popular Makrana marble, and is located in the very center of the city. Khatushyamji is another name for Krishna and also called Khatu Naresh, Leley ke Aswari, Lakhdatar, Sheesh ke Dani, Haare ke Sahare, Teen Baan Dhari, and so on.

Shyam Kund is the religious pond present close to the temple and some people believe that immersion in the pond cures them from diseases and gives good health. People visit the famous Falgun Mela here from different places and believe to become sacred after bath in the pond.

Shyam Bagichi is a beautiful garden close to the temple and flowers are plucked from here to be used in the temple. The famous follower Lt. Alu Singhji's grave is also present in the area.

This temple, near the Khatushyamji temple is a famous Shiva temple. According to a legend, the soldiers of the Mughal king Aurangzeb planned to demolish this temple and so attacked the idol using a spear. 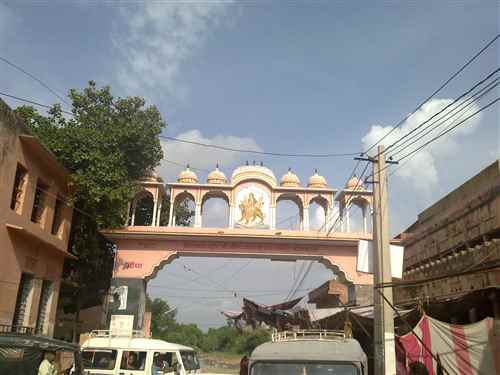 Jeenmata is a renowned village and has religious importance in the district of Sikar. It is situated at a distance of about 29km from the town of Sikar in the south. In this village, there is a very old temple of Jeen Mata and this shrine is said to date back to thousand years. Multitudes of people gather here for the colourful festival which is held yearly twice, during Ashvin and Chaitra months, at the time of Navratri. There are many dharamshalas here which accommodate a great number of tourists.

This Jeenmata temple is said to have been rebuilt and repaired several times. According to legends, there is a wide belief which has been transferred to people across centuries, that in Ghanghu village of Churu, king Ghangh was in love with and got married to an Apsara (nymph) agreeing to the condition that he will never visit her palace unless he gives prior information. King Ghangh had a daughter named Jeen and a son named Harsha. Then, she conceived again, but there was ill fate for king Ghangh as her went to visit her in her palace, but did not give prior intimation. Thus he violated the solemn vow made before the Apsara and so immediately she left him and fled with her children, whom she deserted at the area where the temple presently stands. The children are believed to have practised high forms of asceticism and years later, a Chauhan king constructed this temple at the same place.

Jeen Mata's followers include the Brahmins, Yadavs (Ahir), Rajputs, Baniyas, Meenas and Jeengars who are a warrior sect of Rajasthan in the area. A huge number of the followers of Jeen Mata stay in Kolkata and keep visiting the temple of Jeen Mata often. Just near this temple is the famous Harsh Bhairavnath temple located on a hill-top.