Sikar in One day

Sikar is very much a part of Shekhawati, similar to Jhunjhunu, and was the largest Thikana (Estate) of the Jaipur State ruled by Shekhawats (Rao Ji Ka sub-clan). Sikar was the capital city of the Thikana Sikar and is surrounded all around by tall walls containing seven “Pols” (gates). Raja Bahadur Singh Shekhawat, the Raja of Khandela offered the village Beer Bhan Ka Bass (original name of Sikar) to the son of Rao Jaswant Singh of Kasli Thikana, Rao Daulat Singh, as a gift. In 1687, Rao Daulat Singh Ji laid the foundation of the new Thikana Sikar at the village spot of Beer Bhan Ka Bass, and erected the fort there.

Would you like to have a good and scrumptious breakfast first or do you wish start your day religiously by visiting a temple? Here are some ideas for both:

Next in our itinerary is the Khatu Shyamji temple located at a distance of 80km approximately and takes about 2 hours to reach from Sikar.

The popularity of the Khatu Shyamji temple is increasing day by day and the atmosphere inside the temple is marvelous. If you plan to stay over, you can arrange for a comfortable stay in the various dharamshalas and Seva Sadans of various organizations near the temple. Before going for darsan, people take holy dips in the new shyam kund built for bathing and the old one is unused now. Photography is strictly forbidden inside the temple premises.

Near the Khatu Shyamji temple is another famous temple, the Harshnath temple. Would advise that the driver should be familiar with the place and have experience in driving in hills as they are dangerous for the inexperienced. This place is definitely a must visit in Sikar for the beauty of the temple, amazing architecture and the fantastic view of the city below. This temple is located in the only hill station in Sikar and legend has it that this temple was destroyed by Aurangzeb’s army. You will be able to see the ruins of the temple which have not been disturbed by the invasion at all.

The fort of Laxmangarh is a matchless piece of fort architecture in the whole world because the fort is built upon rock pieces scattered from huge rocks. One of the most remarkable forts in the Shekhawati region, the Laxmangarh fort offers awe-inspiring views of the city and its surroundings. This most imposing small fortress emerges over the well laid out town on the west side. This fort was built in the early 19th century by the Raja of Sikar, Laxman Singh, after Kan Singh Saledhi besieged the wealthy town. The owners of the Laxmangarh Fort, the Jhunjhunwala family, are local businessmen and they have closed access to the public. However, you can climb to the top of the ramp to a temple which is open to the public and the view from this ramp is breathtaking. Obviously, seeing the marvelous view of the town from this height entices you to go further higher, but the guard there efficiently prevents the public from entering.

It is noon time and are you thinking about where to go next? Read on:

Hotel Bagiya (step aside for coffee):

It is time to have some good coffee and the coffee shops in Sikar have modern venue giving them a fresh and youthful look. There are plenty of hotels offering freshly brewed coffee in Sikar and these cafes are uniquely different from the old-fashioned pubs and diners here. The Hotel Bagiya is situated in Nawalgarh Road, at the center of Sikar. This modern hotel is famous for its excellent food and coffee and is well designed to provide pleasing hospitality and ambience.

Deogarh is located on Harshnath road, 10 km away from Sikar and popular for its strategic fort built by Rao Raja Devi Singh of Sikar in the year 1787. This fort is worth visiting for its amazing architecture and Deogarh also has the Deogarh Mahal, which is the former residence of Rawat (a Land Noble) of Deogarh. It is advisable to track your route as there is no road leading to the fort. Rao Raja Devi Singh strategically expanded the town by constructing the fort of Deogarh which is situated about 8km to the southeast of the town. During this period, Sikar was on its way to greatness, in due course becoming one of the most important places in the town. 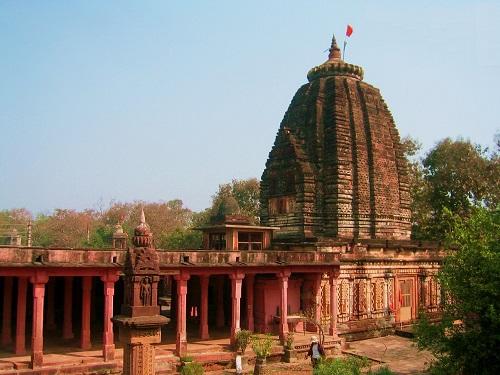 Ganeshwar and Baleswar are both famous places located 15 km away from Neem ka Thana on separate roads and 80 km away from Sikar through Udaipurwati. Ganeshwar is an ancient pilgrimage spot, and at the same time a decent picnic spot. The hot sulphur springs here are the main attractions and a plunge in the spring is believed to cure skin ailments. Archaeological excavations in the Ganeshwar area have exposed the remains of a 4000 years old civilization. Close to Ganeshwar is Baleshwar, another famous and worth visiting place consisting of ponds and an old Shiva temple encircled by the Aravali Hills

According to Historian Rattan Chandra Agrawal’s writings, the area of Ganeshwar was excavated in the year 1977. The findings in this site include ancient red pottery with black sketches and so the period can be estimated to be 2500–2000 BC. Among them, almost one thousand pieces of copper and copper objects including arrowheads, fish hooks, spearheads, chisels and bangles were found in the excavations. Ganeshwar is situated close to the copper mines of the Sikar-Jhunjhunu area of the Khetri copper belt in Rajasthan. Ganeshwar culture can be attributed to the pre-Harappan period from its microliths and other stone tools. According to historical records, Ganeshwar was the place that mainly provided copper objects to Harappa.

If you love picnics, you must not miss visiting Raghunathgarh which is 23km away from Sikar and famous for its fortress. The fortress in Raghunathgarh is situated in the mountain ranges of the ancient Aravallis, at a height of 3500 feet. The two forts in this region were built by Rao Raja Devi Singh of Sikar in the year 1791. Rao Devi Singh was the son of Rao Chand Singh of Sikar and he was a mighty warrior and ruled over Sikar very capably.

The places Raghunathgarh, Kasli and Rewasa in Sikar were ruled by the Chandels, who were Chandravanshi Kshatriyas. They were rulers of a large state in Jetubhukti and faced Prithviraj Chauhan in a war, and were overpowered. An inscription depicting these Chandels was discovered at Raghunathgarh of the year 1150 (1093 AD). Three inscriptions belonging to the year 1243 (1186 AD) were discovered at Rewasa and these inscriptions divulge the fact that Rewasa pargana was under the rule of Prithviraj Chauhan. The inscriptions in Raghunathgarh as well as the three inscriptions in Rewasa are about some warriors. Raghunathgarh is one of the 205 villages in Sikar Block, along with villages like Nada Ki Dhani and Khori Brahmanan. This village situated in Sikar Tehsil, Sikar district, is also an apt place for trekking. This place is accessible by railway and the closest railway station from Raghunathgarh is Sikar. 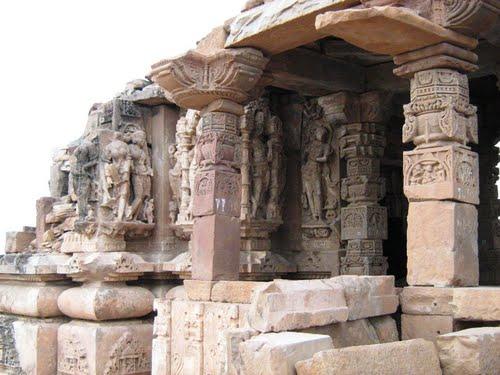 In this pleasant evening time, let us now relaxingly visit some more beautiful places. First, we will visit the eminent Jeen Mataji temple.

Jeen Mataji temple is located about 30km away from Sikar and it is an ancient temple dedicated to Jeen Mata. Jeen Mataji temple is situated in the ancient Aravalli hills, in Raiwasa in Sikar district, and about 115km from Jaipur. It is believed that this temple was built thousand years ago and the sacred shrine of Jeen Mata is also said to be a thousand years old. There are many Dharamshalas here to provide accommodation for a large number of visitors. During the time of the Navaratha fairs every year in the months of Chaitra and Ashwin, millions of devotees assemble here.

Jeen Mataji’s real and full name was Jayantimala and the Jeen Mataji is known as Shakti Peeth. The year of construction of this temple is unknown, but it is believed that the Pandavas rebuilt the temple in the current style at the time of their exile from Hastinapur. The architecture of the temple is splendid and the main hall has pillars covered with engravings of flora and fauna, dancers and deities all over. The temple of Jeenmataji was a pilgrimage spot from early years and it is said that it has been rebuilt and repaired a number of times. A natural poise of serenity is provided to the spot because of the beautiful lush green vegetation and rich flora and fauna surrounding the temple.

To finish our trip, let us move on to the next place in our itinerary, Shekhawati. Shekhawati is a famous spot, due to its various forts, painted havelis, and other historical monuments. Morarka Haveli Museum, Haveli Nadine Prince, Jagannath Singhania Haveli, Dr. Ramnath A Poddar Haveli Museum, and the Khetri Mahal are some of the most popular havelis present here.

The Haveli Nadine Prince was constructed in 1802 and has presently been transformed into an art gallery and cultural centre by a French artist Dr. Ramnath A Poddar, its new owner. Dr. Ramnath A Poddar Haveli Museum contains several galleries about Rajasthani culture. The Morarka Haveli Museum is distinguished for its 250-year old fort, whereas the Khetri Mahal has a very classy structure that dates back to 1770 and provides a wonderful view of the architectural skill of the golden era.

The Mandwa Fort, Mukundgarh Fort and Dundlord Fort are the most important among the famous fortresses of this region. The Mandwa Fort has now been renovated into a heritage hotel, while the Dundlord Fort holds a world famous library containing European paintings. The Mukundgarh Fort contains a large number of courtyards, verandas and balconies and extends over an area of 8000 sq m.

There are various unique mosques and a deer sanctuary present in the Shekawati region, which are also places that must not be missed to be visited. A majority of the tourists get pleasure from going on a camel safari to enjoy the beautiful view of the desert. This is so enjoyable that it has become a popular trend among tourists visiting the place. A large number of palaces in the Shekawati region have been presently transformed into heritage hotels which are equipped with all facilities to ensure an exciting experience to the visitors.

The following are the finest places of accommodation in and around Sikar:

With this, our one-day trip in the famous historical destination, Sikar is more or less complete. You can now take back many precious memories and rich and valuable historical knowledge.