Sikar is a city belonging to Rajasthan state, India. It is present in the Shekhawati region of Rajasthan. Sikar is the administrative head quarter of the Sikar district. Sikar is located at a distance of 281 km from New Delhi, the capital city of India. It lies on the National Highway 11, in the midway while travelling from Bikaner to Agra. Some of the cities in Rajasthan which surround Sikar are Jaipur - 115 Km, Jodhpur - 306 km, Bikaner - 218 km. 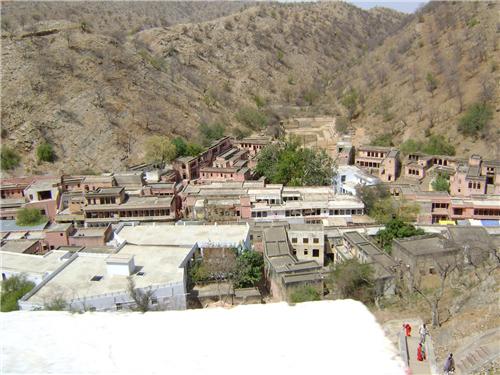 During the Mewar era, Sikar was the biggest estate (Thikhana) of the capital city Jaipur. The kingdom fell under the rule of Shekhawat king, Daulat Singh. It was he who laid down the foundation stone of the fort. Later on his son Shiv Singh, a strong, clever, courageous and bold king made a magnificent fort on it. He developed the village into a beautiful town and surrounded the fort by a strong boundary wall. The royal family of Sikar even lives today at the same fort.

The historical city of Sikar hosts many old havelis attracting a large number of tourists. Apart from the havelis, Sikar is known for it's famous Sikar fort, Laxmangarh Fort and many attractive temples like Harshnath temple, Khatu Shyamji temple etc. Some of the major tourist spots in Sikar are mentioned below;

Geography and Climate of Sikar

Sikar district is situated in the eastern part of Rajasthan. It is located at 27.62?N 75.15?E. It has an average elevation of 427 m or 1401 ft. The climate of Sikar is classified as Koppen climate or hot simi-arid climate. In the months of April-July, the temperatures are relatively high with average daily temperature of 30?C or 86?F. Rains do occur in the months of June-September. The temperature reaches a maximum of around 50?C or 122?F in May and June. During these months there is little or no humidity. Frequent rains and thunderstorms are seen during monsoon season. However floods are not common in Sikar. Winter here is pleasant with average temperatures ranging from 15–18 ?C or 59–64 ?F. Occasional cold fronts in winter may lead to temperatures near to freezing point.

The Municipal Corporation of Sikar is the governing authority of the town which comes under the Sikar Urban Agglomeration. There are 45 wards in Sikar city and the head of Sikar district administration is the District Collector. There is one additional District Magistrate who helps the collector in releasing authoritative obligations. To make the administration easier, Sikar district is divided into sub divisions and tehsils. The Zila Parishad encourages organization at the country level. 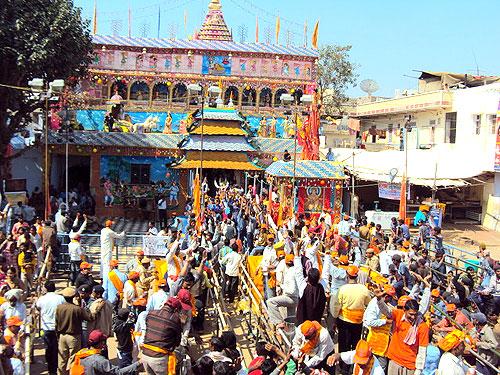 Almost all major festivals are celebrated in the city. Being a Hindu majority in the society, tourists can be part of all the important Hindu festivals like Holi, Deepawali - the festival of lights, Makar Sankranthi, Raksha Bandhan, Teej, Gangaur and Gauga Peer. Carrying the local flavour is the popular festival called 'Khatu Shyamji Fair' which attracts thousands of devotees and tourists alike to the Shyamji Temple at Khatu Shyamji village. Devoted to Lord Krishna, the fair also sees the Jadula ceremony, where children's heads are shaved off for the first time.

Sikar is connected to its neighboring villages and cities through a good network of roadways and railways. The 'Sikar Bus Depot', which is a inter-district bus terminal is located along the Jaipur road and is the central bus stand of Rajasthan State Road Transport Corporation. Buses from this depot travel to various neighboring states like Jaipur, Tonk, Delhi, Alwar, Churu, Jhunjhunu, Bikaner and more. Private road lines, like the 'Shiv Shakti Road lines', also operate in Sikar. Apart from the buses, taxis, auto rickshaws are also available.

By Road: Sikar is connected to all major cities of Rajasthan through road. The national highway NH-11 passes through center of city connecting Jaipur and Bikaner to Sikar. NH-11 is expected to be four laned soon. The western freight corridor, a project of Kotputali Kuchaman, central government will also be passing from sikar.

By Air: Jaipur International Airport is the nearest airport to Sikar. Daily flights to Delhi, Pune, Mumbai, Bangalore, Hyderabad, Indore, Chennai, Ahmedabad, Kolkata and Udaipur are operated here. A new airport at Shahura in Jaipur district is under proposal. Landing space for small private planes is also available at Tarpura Village Air strip, which can be booked earlier.

Like many other cities, either big or small, Sikar also hosts shopping markets for the tourists and residents. These markets present a wide range of apparels, paintings, arts and crafts etc.. for the shoppers. The major markets, in and around of Sikar are; Govindam market – 0.3 km from Sikar, Laxmi market – 0.8 km from Sikar, Diwan market – 1.1 km from Sikar, Harichand market – 3km from Sikar. Apart from the markets, Sika has also being influenced by the 'Mall Culture'. The major shopping malls in Sikar include – Shyam Square Mall, Paharia Tower, Mahasagar, Shukh Shine Plaza etc. These make the shopping experience in Sikar a pleasured memory.

Facts and Figures about Sikar